Digital developers usually deal with low DC voltages around 5V, but there are also higher voltages (12V, 19V, 24V) in less common use directly, and as the input voltage to be regulated down to the lower voltages. Therefore typical bench PSUs are able to provide voltages at least between 0 - 30V.

If you want to be able to control that arbitrary range of voltages, for test or as part of a developer write - burn - crash testing loop, you will need generic DC power switching - turning DC on and off - over the range 0 - 30VDC and up to say 3A. (3A is conveniently the rated current for 0.1" box connectors).

And in our case, we want to do it isolated from the on-off controller, which operates at digital voltage levels unrelated to 30V and indeed an unrelated ground reference.

After the isolated DC-DC and digital isolator (optoisolator, capacitive isolator or whatever) for the control signal, we can just throw a big MOSFET at it, right?

Well, let's compare a humble relay to that kind of solution...

Relays have their own problems, there is a gap between ones capable to switch 2A and those capable to switch more. The 2A ones are available in convenient sealed SMT packages, but above it they are packaged in larger automotive style chunky rectangles.

They have contact bounce, and as electromechanical devices, eventually suffer from various failure modes like the contacts corroding. Switching DC accelerates some of them; for that reason a relay rated to swith 277VAC may only be rated for 28VDC. In fact DC is a big problem, typical relay datasheets specify a "minimum recommended contact load" of ~100mA at 5VDC, we do not want to burden our users with that kind of restriction for the generic case. In both cases it's related to electrochemical effects at the contact points of the relay switch.

There are optoisolated "solid state" relays, which are integrated MOSFET solutions, but these are VERY pricey for low on-resistance. And without the low on-resistance, they get hot. US$35 will buy you one that tops out at 2.5A and 24V, which doesn't meet our goals.

So what are the underlying problems a MOSFET faces with this generic switching task?

MOSFETs are used everywhere in electronic equipment for power control. Can't we just use an off-the-shelf IC for gate drive? This looks good at first sight

There are many nice gate driver ICs which can be used for both N and P MOSFETSs, and include their own charge pump to provide the necessary gate voltage.

Well, these solutions don't work for switching input power down to 0V relative to system 0V. They assume that

This last 'feature' is highly desirable in the case we're a regulator switching from a low battery, or a decaying source power supply that has been switched off, and enabling the switch should be forbidden. But for the 0 - 30V target, it renders the solution useless: in some cases like the TI chip linked above, the undervoltage threshold is as high as 7V; we can't even switch 5V with that. Plus then the charge pump is powered from the switched power; we just want to turn it on or off, not consume it.

In our case we have our own isolated power we need to run the switch from, and we need the power switch side to work independent of the voltage being switched (in the valid range 0... 30V).

As the author says

''All these difficulties make the high side driver design a challenging task.''

Problem 2: Importance of enough gate margin to "enhance" the MOSFET

Switching low voltages at high currents really requires these 'difficult' gate voltages, either 10V below 0V or above the switched voltage. If you try to switch using 0V or the rail voltage at the gate, as the switched voltage decreases the voltage between the Source and Gate will likewise decrease until MOSFET will find itself in the linear region, where it is not fully "on" and enhanced any more, but is restricting the current that may flow proportional to the gate voltage. In the worst case where the resistance of the MOSFET is equal to that of the the load, the MOSFET will dissipate (V/2) * I, for V=2V (typical linear region Vgs) and I=3A, that means 6W as heat. So we need to not be in the linear region of gate voltages.

If the MOSFET is instead always fully enhanced by the "difficult" ~10V gate-source voltage, at low voltages the heat dissipation is negligible because the on resistance is 10mR for P or as low as 75uR for N.

Increasing the danger of finding yourself spending too much time in the dangerous linear region of the gate potential is the capacitive nature of the gate itself. You basically have to modify the gate charge, which is an RC type activity whose speed depends as much on the impedance (the R part) of the drive voltage you want to change it to, as it does the gate's intrinsic capacitance (the C part).

The larger (more power-capable) the MOSFET, the higher the gate capacitance.

To change the gate charge quickly then, so we slew through the linear region in ns rather than ms, the gate drive must have access to a low impedance power supply at the right level, where the "right level" is "Source - 10V" for a P Channel MOSFET, and it must actively switch the gate drive... pullups are too slow since they form an RC network with the gate capacitance.

P and N channel MOSFETs as High Side Switch

As you can see, these voltages are not referenced to the system 0V but to the switched voltage, ie, the MOSFET source. Any MOSFET will immediately, permanently die if the gate voltage should ever exceed a maximum permitted source-gate voltage, usually around +/- 20V compared to the source; this is scary seeing as our input range encompasses 30V. It's also scary because violations as short as 1ns will kill the MOSFET, at 30V hotplug transients can easily manage this if there are no steps taken to protect it.

Problem 4: MOSFET Switch only works in one direction

With the Humble Relay, there is no intrinsic polarity to the two sides of the switch, both sides are interchangeable. 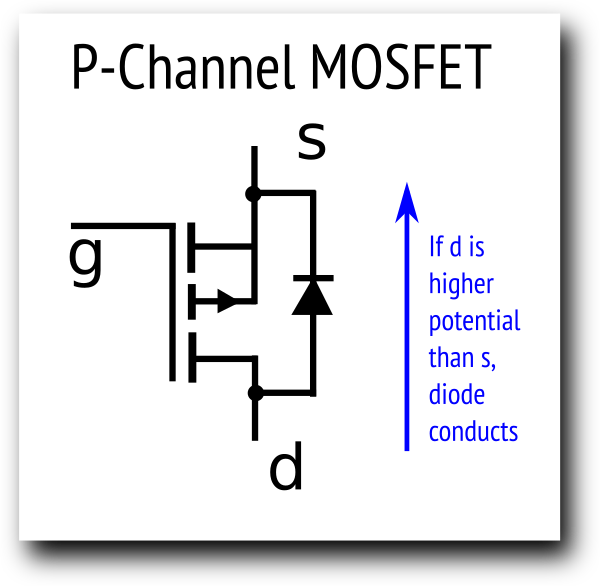 But with a MOSFET, he has a giant parasitic diode between D and S. That means if there is a MOSFET between them, the two sides of the switch are quite different, one must be more positive than the other for normal operation. What happens if they are the "wrong" way around is that even when the gate is not driven, the parasitic diode conducts and the switch is effectively "always on".

If there is a high load (3A in our case), the diode voltage drop translates to a large heat dissipation at the MOSFET, and we can't turn it off, since the diode is unconditionally conducting under those conditions. So the MOSFET will just burn.

Again, the Humble Relay doesn't care if you are switching voltages below 0V or indeed what the voltages are referenced to, if it doesn't make the relay insulation break down. In our case we only support positive voltages compared to system 0V, but as it stands with one MOSFET doing the switching, again the protection diode will conduct and we lose control of the conduction and heat generation at the MOSFET.

The most common case for this in the real world is someone reversed the input power polarity. We will continuously pass it (minus a diode drop) and blow up his attached equipment and maybe our MOSFET.

If we just have a simple MOSFET doing the switching, for all normal solutions the 0V the switched voltage is referenced to is required, as part of the gate voltage generation. In contrast the relay doesn't care, contacts are either shorted or not: what the voltage on the contacts is referenced to is not relevant assuming it's within the voltage + current profile the relay contacts and isolation is rated for.

That's a whole bunch of problems. Giving up and throwing a relay at it creates its own problems.

So is there a way through each issue?

We can simply use an isolated DC-DC converter, with one output side (- for N, + for P) connected to the MOSFET source and the other side being the gate drive level. 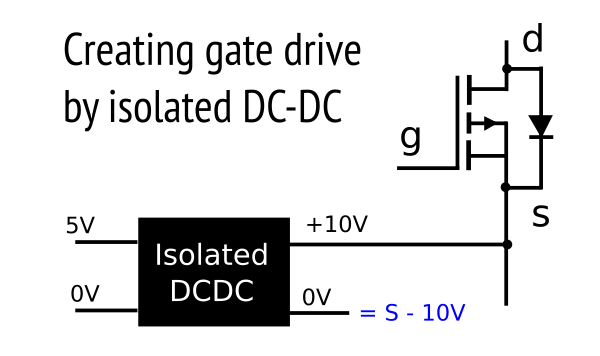 The solution is expensive in physical size though and not that cheap. But it nails several critical problems.

Now we have our own isolated domain for gate drive, we can use a discrete optoisolator with his output directly referenced to that domain.

Solution 6: Removing the need for 0V reference on switched side

You might still want it so you can measure the voltage of the switched side, but with the DC-DC converter and optoisolator scheme, there is no longer any need for the switching 0V reference in the switching circuit. Everything there is floating and referenced to the MOSFET Source, which as we will see becomes the highest of the two potentials on either side of the switch, minus a diode drop if the switch is off.

We cannot eliminate the parasitic diode on the MOSFET. But we can add a second identical MOSFET in series with its parasitic diode in the opposite direction, effectively blocking current flow between the drains via the diodes. 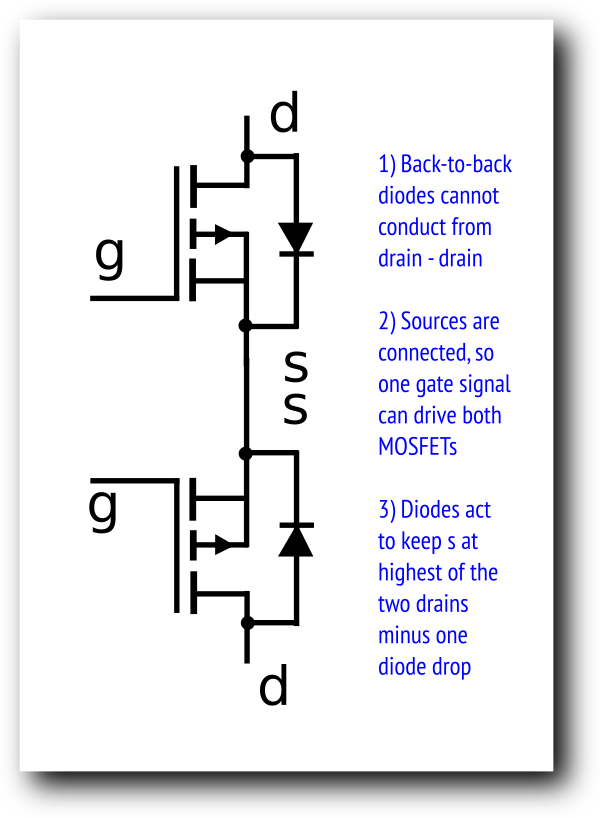 Now whatever the situation at the two drains, the diodes cannot conduct on both sides simultaneously and pass current from drain-drain without the MOSFET actually being on.

Instead the drain with the highest potential will set the bias on the combined source pins of the two MOSFETs, minus a diode drop when the MOSFETs are OFF. We don't care what that is, but since we will use the source pins as our reference for the floating gate bias, we need it.

Now whichever way you connect the voltage source and switched output, it meets the same situation, and no current passes without the MOSFET being on. We can monitor the combined source pins and estimate the highest drain voltage even when the switch is off.

This solves the "uncontrolled parasitic diode conduction" problem, but it creates a two new, smaller problems:

1) the parasitic diode was actually useful snubbing negative flyback currents created when the load was somewhat inductive. We therefore need to add back a diode on either side of our switch (to system 0V this time) to snub negative excursions.

2) We doubled our Rdson by making the switched current navigate through two MOSFETs instead of one. We can mitigate it by using slightly more expensive P Channel MOSFETS with 10mR Rdson, giving a manageable 20mR total. (Originally I was using cheaper P channel MOSFETS each of 20mR).

Solution 1 & 3: Isolated, active gate drive for on and off

We can use a discrete bipolar totem pole circuit to actively force the gate between source and the gate drive voltage rapidly, without relying on pullups. 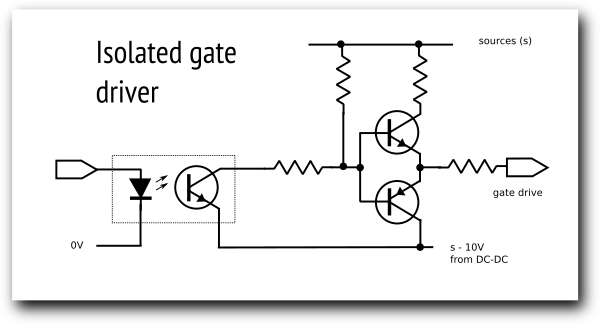 The fact we control the gate from a discrete optoisolator simplifies controlling it, as we can directly reference the transistor output of the isolator to the floating S - 10V.

We can detect that either side of the switch is lower than a diode drop below system 0V (if they bothered to connect that), and turn off the MOSFETs. Now we have two MOSFETs, with back-to-back parasitic diodes, no fault current can flow through the diodes with the MOSFETs off, so we just need to turn the MOSFETs off when we see negative voltages.

The solution to this is a comparator to monitor if either side of the switch is more than a diode drop below ground, and an N-channel MOSFET that can disconnect the external ground, as well as the high-side switch.