Galvanic isolation means there is no path for electrons to flow directly between two points. 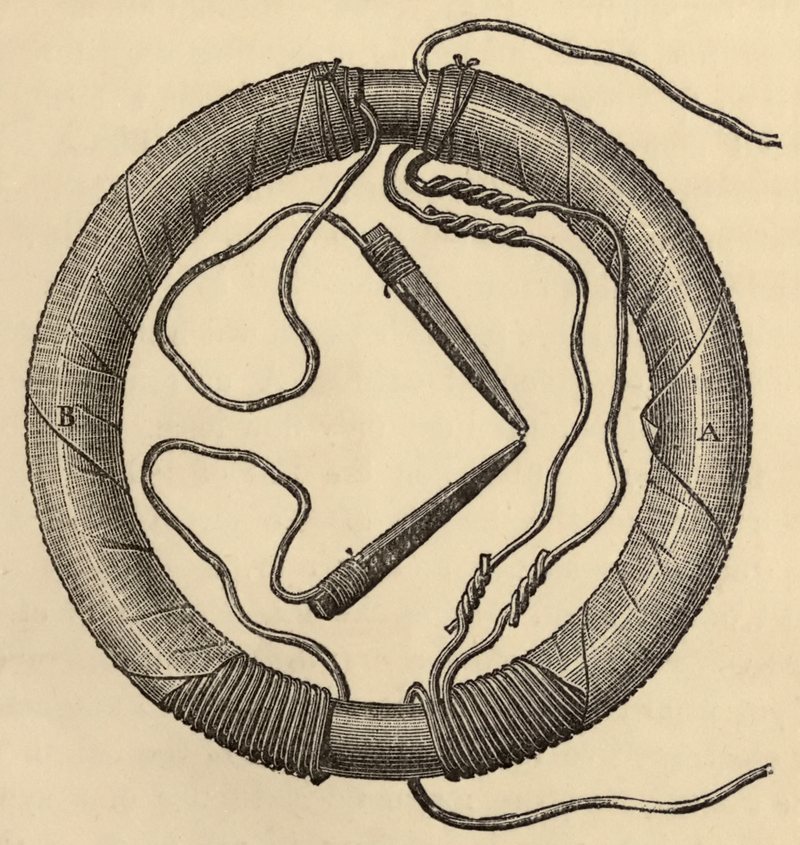 This is how come you can plug your phone charger in the wall, which is at a voltage that can hurt or kill you, but you can touch the shield of the USB connector coming out of it without problems, the energy passed through a magnetic intermediary that removed all direct connection to its origin. (This is not 100% true in a real power adapter, as we will discuss in another article).

In Faraday's version, the two sides are not physically connected to each other; the wire is isolated from the metal ring with "cotton and calico". The official term for this is that the two sides are "Galvanically isolated", this is after Lugi Galvani, another European this time from the 18th Century, who discovered the effect of electricity on dead frog muscles, "sparking off" the whole Frankenstein thing.

Instead it weakly finds its own potential according to whatever tiny leakage currents are available - if you connect it to something, it will immediately align itself to the potential of whatever you connected it to. In itself, it won't put up any resistance to adopting that reference; it is not connected directly to anything that could provide resistance.

In a building (especially between floors), across a building and sometimes even in a room, the earth reference at the mains sockets it not at the same potential everywhere.

That means if they should be connected together, for example by plugging different equipment together even if the connection is indirect, current will flow through the connection.

This can cause mysterious 50/60Hz hums, unexpected sparks, crashes and shocks when connecting cables etc.

If the connection is via galvanic isolation, this kind of issue is eliminated.

This isolator isolates in itself, but... 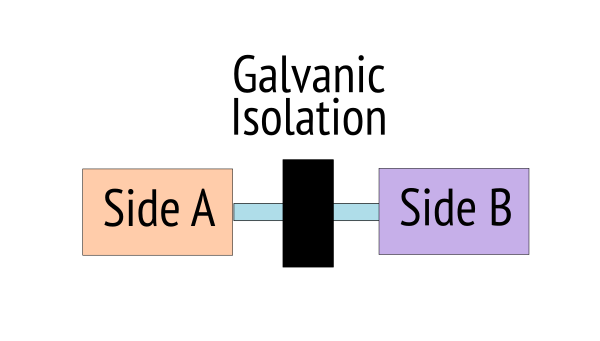 "in itself" may not be the whole story, there may be other external connections and relationships through those connections that can pass current directly, bypassing the isolation. 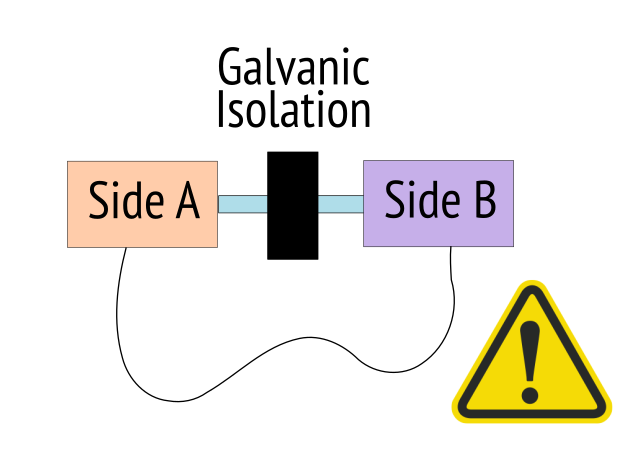 For example your battery powered instrument may become completely un-isolated if you plug in a USB connection to your PC, or plug in a charger, or you accidentally left a 'scope ground probe connected somewhere. 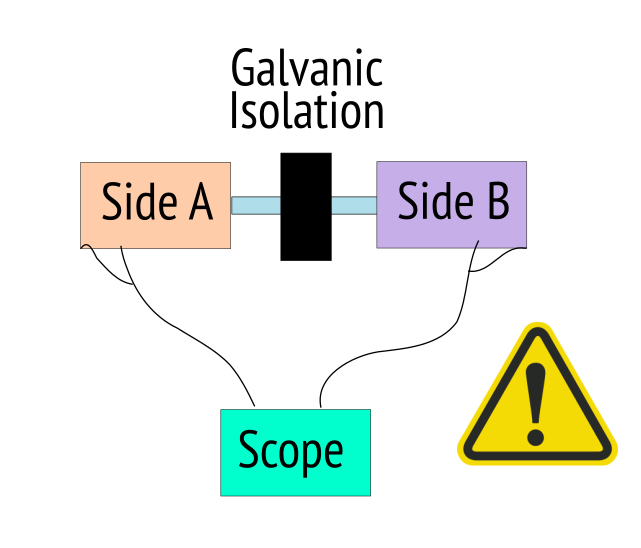 It's the user's responsibility to make sure the isolation can be effective in the larger system safely.

The two sides are isolated via insulation, but...

Nothing is a perfect insulator, but many things have such high impedance they can usually be counted as infinite for some set of purposes.

No direct path for electrons to flow, but...

There will be a breakdown voltage at which the insulation will break down and conduct, arcing over. This is a particular consideration trying to connect to mains with isolated equipment, since the mains is nominally 110VAC or 230VAC, but can experience excursions many times higher if you, eg, plug or unplug the equipment or other mains equipment on the same ring.

So the degree of isolation must be qualified with the maximum voltage below which the isolation is guaranteed to not break down. Often this is in the hundreds of volts or kV range, although that also must be qualified as the whether it's talking about DC or AC and for how long it can withstand that potential difference. If there may be excursions, you will have to do something to snub them.

There is also a breakdown mode related to formation of conductive carbon deposits between conductors that have a high DC potential between them for long periods... this "tracking" that forms is like a kind of soot. I'll discuss that further in a related article.

If you will use isolated equipment that has dangerous potentials between the two sides, you must concern yourself with these and other details and safety arrangements.

A system involving galvanic isolation usually has two things that must cross the barrier, power and data. 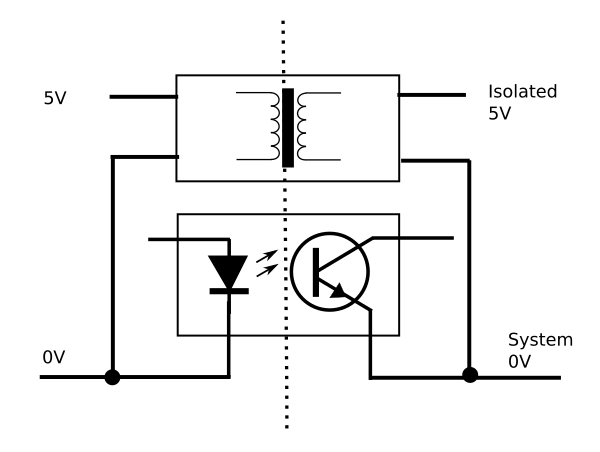 And in the overall system, there will be two "0V" references, one on the nonisolated side and the other we can call "System 0V" on the isolated side.

Isolated DC-DC converters are available quite cheaply and quite compactly for up to 1W. Inside the insulated package, they contain a tiny toroidial transformer very much like Faraday's. They are rated for isolation voltages from 1kV to 3kV usually.

There are several ways to communicate across the isolated domains without a galvanic connection.