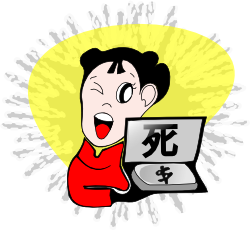 Pretty strange version of Fedora running on 1&1 dedicated Linux servers. First it is FC4, which is out of security update coverage, and Fedora Legacy has gone away too. I update it to FC6 via yum (worried about the libata change in the F7 kernels making it unbootable... needn't've worried since I can make it unbootable all by myself). After the update the /boot/grub/grub.conf looks a bit strange, grubby did not make an entry for the FC6 kernel so I add it by hand. On reboot, it ignores the new kernel and boots the old one. Further digging reveals that it is set up to use LILO, not grub. They provide and cook their own 2.6.17 kernel which was built on a Debian box and does not use an initrd: it has all the drivers it needs built into the monolithic kernel. Hm. I google through pages from 1998 to learn about LILO, I make a mistake: I saw they had a symlink /boot/vmlinuz to point to the kernel they boot from, so I changed the symlink, reran lilo and rebooted... it doesn't come back up. Now 1&1 have a cool serial console server concept, you can ssh into their central site with your per-server credentials and you are looking at your server's serial console. From this I see it can't find the root filesystem. Well no problem, I will choose one of the backup lilo.conf configurations at the prompt, right? Nope, they all rely on the same vmlinuz symlink I changed. So at this point after an hour or so of having the shiny new server, it is borked. However 1&1 offer a free network boot recovery feature you can select from the web page: I did this and came up in a Debian recovery boot presumably over PXE. From there I could mount my root fs /dev/md1 on /mnt and undo my kernel symlink change, and so got back a working system. Whatever else, that is a pretty robust setup, I could trash the thing into an unbootable state and recover it all by myself without any tech support or even having to wait. Great! However considering they advertise it as a "Fedora" system, aside from not being able to use Fedora kernels, the jarring strangeness continued. There is no selinux set up. This is pretty bad considering the support is everywhere in Fedora for it and it doesn't cause any trouble nowadays. Nor is it possible to enable selinux simply: because the partition-happy Debian admins that set it up decided to format some (not all) of the partitions as xfs. There is no firewall enabled... all of your entrails like network MySQL access are hanging out for the world to see. I installed system-config-securitylevel and had it set up a bare Fedora-style firewall on top of which I copied over my long, long (and growing) list of DROP netblocks. Some evil and perverse web admin stuff was on by default, dozens of PHP apps, that involved redirecting your mailserver log to somewhere crazy on /usr. This seems like an invitation for bad things to happen, so I tore them all out with yum remove. After some hours all of the virtual hosts on Apache were back up except yahoeuvre, which was creating problems in the error logs and not working properly. Since it has been deprecated for a long while due to Yahoo format changes, I didn't bother fixing it and set it to redirect here instead. However, I am left wondering... is it fair to call that... well, "heavily customized" Debian-Fedora hybrid OS "Fedora"? The Fedora kernel does have an xfs module, but they don't allow to format stuff xfs in Anaconda so it's "not really supported". They provide great admin tools though, not the PHP garbage but the serial console server and the recovery netboot are fantastic remote server admin powers: really allowing you to get out of jail when you need to. Maybe it will be possible to come up in the recovery console, copy out the contents of the xfs partitions somewhere and reformat them ext3 and gradually convert the thing to "proper Fedora". EDIT 2007-09-05: In fact I have now converted this 1&1 server to "proper Fedora 7", see this post for details.